Stop the clock: why countries are killing daylight savings time

Spring forward, fall back no more?

Every October and November, dozens of countries around the world turn back their clocks and watches by one hour, correcting a change made six months previously.

Not everyone loves daylight savings time — particularly when clocks go forward in March and 60 minutes of sleep are suddenly lost.

Some studies have even suggested it results in an increased number of heart attacks, traffic accidents, workplace injuries and crime.

About 60 per cent of countries do not change their clocks. More than 70 observe the practice, but many are now considering scrapping it.

So why have some countries stopped it? And why do so many do it in the first place?

Why have daylight savings time?

The idea of moving the clock forward one hour from standard time is to give people more daylight during summer evenings and more light during winter mornings when clocks go back.

It is said that many countries adopted the practice during the First World War as a way to conserve coal.

In 1916, Germany became the first country to begin the practice, with the US and much of Europe soon following.

When does it start and end?

In the UK and Europe, daylight savings time 2022 began at 1am on Sunday March 27 and ends at 2am on Sunday October 30.

In the US and Canada, it is Sunday March 13 to Sunday November 6.

The Middle East countries that follow the practice have various start dates in February and March that in September or October.

Which countries have abolished the changes?

Dozens of countries abolished the practice after observing it for many years, including Egypt, Sudan, Syria, Iran, Iraq, Turkey, Armenia, Azerbaijan, Argentina, Brazil and Russia.

Clocks in Saudi Arabia, the UAE, Bahrain, Kuwait, Oman, Qatar and Yemen are also not changed, along with India, China and Japan.

These countries will now be joined by Jordan after authorities scrapped the measure on Wednesday. 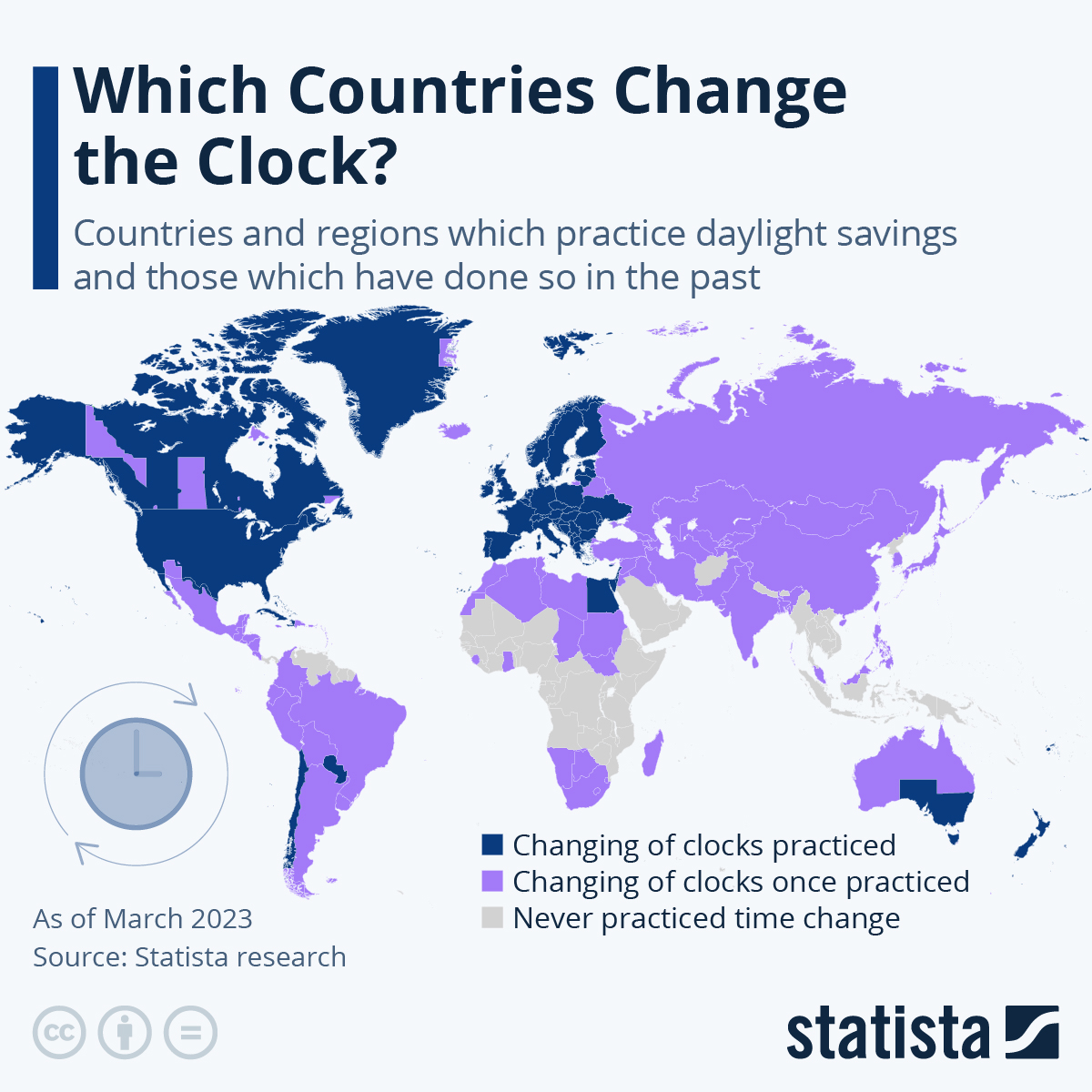 You will find more infographics at Statista

Summertime, or daylight savings time, will now be “all year”, an official statement said.

This means that Jordan will remain at GMT+3 and will not change to GMT+4 later this month.

Which countries could get rid of it?

In the US, the Sunshine Protection Act was proposed to make daylight savings time permanent, removing the need to change clocks twice a year.

On March 15, the bill was passed by the US Senate unanimously. It now needs to be discussed by the House of Representatives before it can be signed into law by the president.

If passed, it would take effect on November 5, 2023 — the day before clocks are due to go back.

Several bills to discontinue the act have been introduced at the state level, passing in California, Florida and many others.

A 2022 bill to exempt Virginia said the “overwhelming conclusion” of researchers is that it “directly results” in an increase in heart attacks, traffic accidents, workplace injuries, pedestrian deaths and crime, as well as sleep disruption and a loss of productivity.

It said research has also found a link to seasonal affective disorder, strokes and cardiac arrest.

Mexico has had daylight savings time since 1996, but in early July, President Andres Manuel Lopez Obrador sent a bill to Congress to end the practice, saying the time change negatively affects those with cardiovascular and memory problems as well as sleep disorders.

If the bill is approved by the Senate, Mexico will get rid of daylight savings time in autumn.

The European Union, too, wants to get rid of daylight savings time.

In March 2019, the European Parliament voted to dispense entirely with biannual clock changes.

The change was supposed to be enacted following agreement from the European Council — but the body asked the European Commission, the EU’s executive arm, to conduct an impact assessment first, Bloomberg reported. The issue remains in deadlock.

The UK has no plans to give up what it calls British Summer Time, despite a YouGov poll finding that those opposed outnumber those in favour by 40 to 33 per cent.