It’s called the “blue marble” for a reason.

Looking at the Earth from space, the enormous swaths of brilliant turquoise and navy blue dominate the picture, yet we focus so much of our attention on the landmasses floating amid all the water. Our oceans are the largest ecosystem on Earth – responsible for generating approximately half of the oxygen in the atmosphere and holding approximately 97 per cent of the water on our entire planet.

They are vital to the existence of all species on those floating landmasses, including us.

However, our vast oceans are under threat. Activities such as mass overfishing, unprecedented plastic pollution, widespread habitat destruction, climate change, and coastline overpopulation are disrupting food chains, damaging vital marine ecosystems irreparably, and causing our oceans to suffer. What's more, unlike sovereign countries, which abide within set rules of jurisdiction, the oceans have no set boundaries.

As such, the threat to our oceans requires a cross-country, collaborated solution. No one nation can address this problem on its own. Only global partnerships can underscore our collective commitment towards the protection and preservation of local marine biodiversity, equitable governance of coastal activities, and sustainable management of our marine resources.

The World Ocean Summit, the sixth of which begins in the capital tomorrow, is essential in promoting dialogue with key stakeholders. On behalf of Abu Dhabi Government, the Environment Agency – Abu Dhabi and the Department of Economic Development are proud to be bringing this critical conversation to the Middle East for the very first time. Gathering the foremost conservation experts and thought leaders from around the world to promote healthy changes to our waters and to showcase and share the best practices in marine protection and sustainable development will allow us to create a greater impact, together. This year, the World Ocean Summit will also feature exciting new areas of innovation in the burgeoning field of “blue technology”, including the use of underwater drones and advanced shipping machinery.

Despite being a desert nation, the sea has always been vital to Abu Dhabi's history and culture. Located at the geographical epicentre of global trade routes, with one of the most populous coastal communities in the region, Abu Dhabi and the UAE enjoy a rich tradition of trading, seafaring, pearling, shipbuilding, fishing, along with a growing tourism sector. 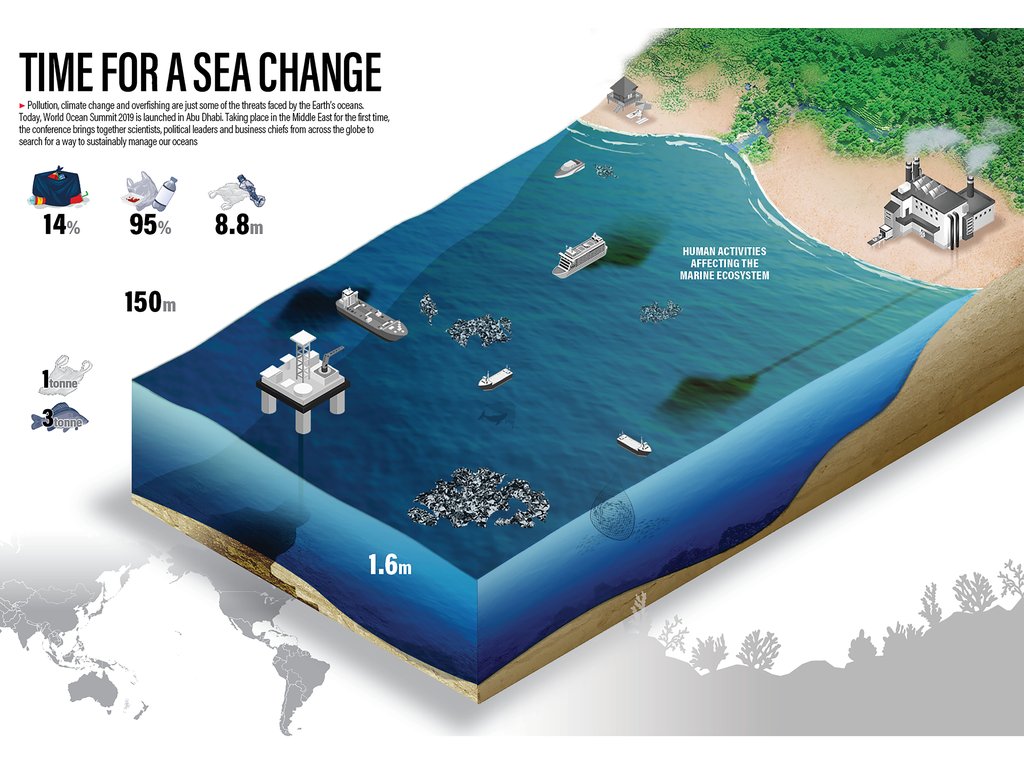 With our drinking water supply coming entirely from desalinated seawater, and a reliance on potable water through plastic bottles, there is an urgent need for us to look at more sustainable ways to package our daily water supply and deal with broader desalination issues. Preserving our waters is of upmost importance, with the UAE government making crucial investments in blue technology and aquaculture, and implementing major conservation initiatives such as our Marine Water Quality programme, in which we use a network of 22 monitoring stations to collect imperative data on biodiversity to protect public health.

Read More
Global Abu Dhabi summit to address threat to world's oceans
Beyond the Headlines: Saving the planet, one kilometre at a time

Later in 2019, the UAE will assume presidency of the Indian Ocean Rim Association (IORA) until 2022 for the first time since becoming a member in 1999. Organisations such as IORA illustrate the importance of regions coming together to share maritime environmental responsibilities. Coastal communities account for approximately 40 per cent of the world’s population, with around 900,000 people in the emirate of Abu Dhabi alone. Those figures underscore the crucial need to effectively and sustainably manage the pressures of urbanisation and industrialisation on our oceans.

The governments of Abu Dhabi and the UAE are proud of our marine conservation work so far, but saving our oceans is a responsibility shared by us all. By building bridges that connect us, we can come together as one and effect real change. It is in everyone’s best interest to preserve our oceans and ensure that the “blue marble” remains blue.

A great hiring decision comes down to one thing

For too many people, cancer care remains out of reach – but we can change that

America is partially responsible for Israel's tilt to the right

In these winter months, 2023's Bafta and Oscar contenders will warm your heart