Queen Rania vs Melania: Who wore it best?

During a White House visit, both first ladies opted to wear pink. We break down the outfits

King Abdullah II and Queen Rania of Jordan arrived in Washington yesterday, bringing a much-needed dose of regal elegance to the American capital.

In the country for a four-day state visit, Queen Rania took the opportunity to take tea with the first lady, Melania Trump, and interestingly, both wore pink. That raised the burning question of who, exactly, wore it best? 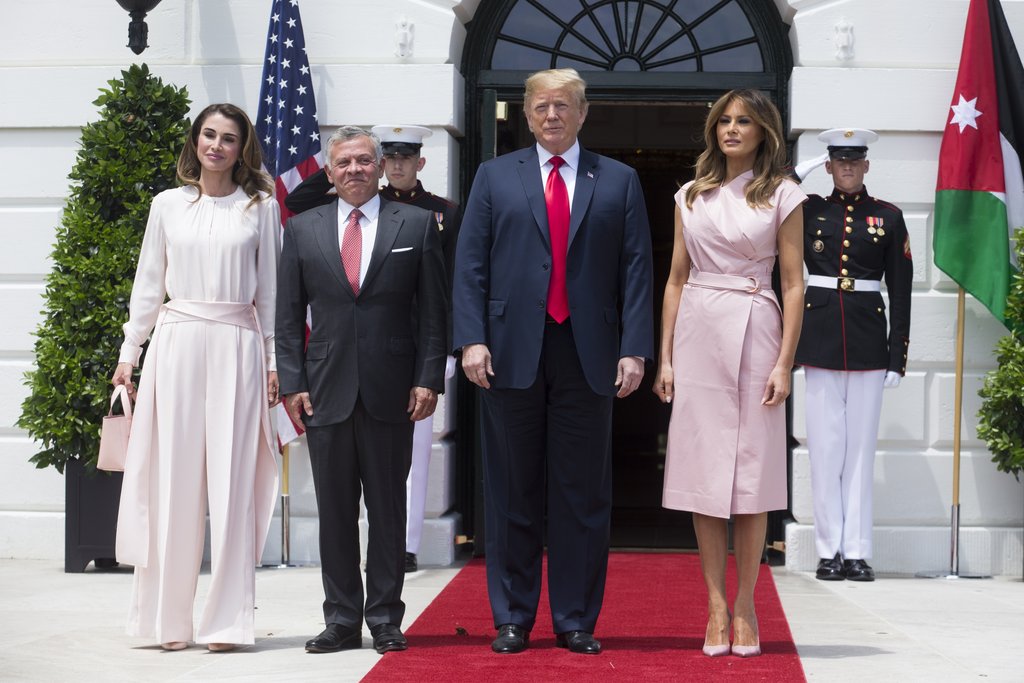 Mobile users: Please turn your phones to landscape to view the full content

Mrs Trump, it has to be said, is a well-turned-out woman. She may have questionable taste in jackets, but there is no denying she scrubs up well, so to greet the royals, Melanie chose a pale pink leather dress by Proenza Schouler, with similarly toned Casadei shoes. Despite capped sleeves, an interesting wrap cut and being cinched with a belt, the dress was actually fairly discreet. The opposite of a conversation starter, if you will. Presumably, after the disaster of the "I really don't care. Do U?" coat of last weekend, she opted to keep a lower profile yesterday, in which case, this dress worked well. However, while she has an enviable wardrobe, one thing that must be pointed out about the first lady is that no matter how well-tailored her clothes are, she always looks slightly uncomfortable. As the saying goes: Is she wearing the dress or is the dress wearing her?

Meanwhile, Queen Rania chose a very pale pink top and matching wide-legged trousers by Adeam – the Japanese/American womenswear label. The top featured a keyhole detail around the neck (closed for modesty) and delicate front pleats, while the matching trousers fell from the sash waistband in loose, fluid folds. Tied with a long side belt, and with hems practically grazing the floor (with only the barest hint of toe peeping out), the queen looked wonderful. Elegant, effortless and totally, utterly chic, Rania won this battle without even trying.

Read more: Your guide to the Crown Prince of Jordan's slick man cave

It probably also worth noting the outfits of their respective spouses.

King Abdullah’s suit complemented his wife’s outfit, and although not a tall man, the king takes pains to wear suits that fit him well, here donning a neatly buttoned, single-breasted suit, with a flattering, tapered look. Importantly, the trousers broke perfectly on his shoes, effectively adding the impression of height. Impeccable to the last detail, his tie was a muted pink – echoing the Queen’s look – while his pocket square sat in a crisp, neat line.

Then there was President Trump, in a suit that made him look like a shady used-car salesman. Ill-fitting and shapeless, he wore it open (as is his wont), perhaps to better highlight the jacket that was too long and trousers that were too short. The trousers, meanwhile, failed to meet his shoes, ballooning his trousers.

The most unforgivable part of Trump's dress sense is always his tie, however. Even a schoolchild knows a tie should just graze the belt – not hang down past it, throwing off all sense of proportion. To that, add Trump’s fondness for a lurid shade of red that manages to clash both with his wife’s dress and his own skin tone, and you are left with a rather unfortunate fashion fail.