The latecomer to the master's oeuvre will be the first painting by Leonardo da Vinci to find a permanent home in the Middle East, and will go on loan to Louvre Paris for a 2019 show

The date has been set for Leonardo da Vinci's Salvator Mundi, the world's most expensive painting, to be unveiled: audiences here will see the 500-year-old, long-lost painting at Louvre Abu Dhabi on September 18, 2018.

"This is a very important and exciting moment for Abu Dhabi as we witness a masterpiece by one of the most important artists in history coming to our city to be displayed at Louvre Abu Dhabi," says Mohammed Khalifa Al Mubarak, chairman of Abu Dhabi's Department of Culture and Tourism (DCT).

Salvator Mundi, as a figurative painting of Christ, is also an extraordinary painting for the new Abu Dhabi museum as an indication of its values of religious tolerance. "Salvator Mundi highlights the inclusive nature of Louvre Abu Dhabi's narrative and Abu Dhabi's mission to promote a message of acceptance, and openness," underlines Al Mubarak. Having spent so long undiscovered, this masterpiece is now our gift to the world and we look forward to welcoming people from near and far to witness its beauty."

The first da Vinci on permanent display in the Middle East

Salvator Mundi will be the first painting by Leonardo on permanent display in the Middle East – indeed, anywhere outside of Europe and the United States – and is a coup for the young museum, which opened last November. It also means that for a time, Louvre Abu Dhabi will join an elite group of five or six institutions worldwide that have two Leonardo paintings on show: the museum currently has Leonardo's La Belle Ferronniere on loan from the Musee du Louvre. That work is expected to return to Paris in November. There are only 24 paintings widely accepted to be by Leonardo in the world, with another eight under discussion.

The arrangement behind the Salvator Mundi, perhaps befitting the painting's remarkable provenance, remains unusual: the painting is in the collection of DCT, and will be on long-term loan to Louvre Abu Dhabi. After its initial unveiling in Abu Dhabi, it will travel to the Musee du Louvre for a planned Leonardo show marking the 500th anniversary of the artist's death. This will reflect a new stage in the relationship between Abu Dhabi and Paris, with the UAE loaning works to Europe, rather than the other way around. The Musee du Louvre show opens in October 2019, and when it closes in February 2020, the painting will return on a permanent basis to Louvre Abu Dhabi.

The painting was acquired in spectacular fashion last December, when it was bought at Christie’s in New York for US$450 million (Dh1.65 billion), making it the most expensive painting ever purchased at auction. Despite initial confusion over the work's buyer, it ultimately emerged that Abu Dhabi's DCT purchased the work.

"We chose this painting based on its rarity, its classification as a masterpiece, and its synchronicity with the curatorial narrative of the museum," says Al Mubarak. We acquired this artwork to offer the people of the UAE, along with regional and international audiences, the opportunity to engage with a rare and iconic work of great cultural significance."

The importance for Louvre Abu Dhabi is not about the price or the intrigue, but about the chance to have a work by one of the world's most important artists on permanent view. The painting shows Christ blessing the world: his fingers raised in a gesture of benediction typical from Byzantine icons onwards. In his hand, he holds an orb, representing the cosmos – and again a typical accoutrement for paintings of Christ as the saviour of the world. This devotional style is unusual for Leonardo. As in The Annunciation, many of his figures are shown in action, or, as with St John the Baptist, a later painting which this work resembles, pictured slightly turned to the side.

Hover over or tap the painting to read more about it: 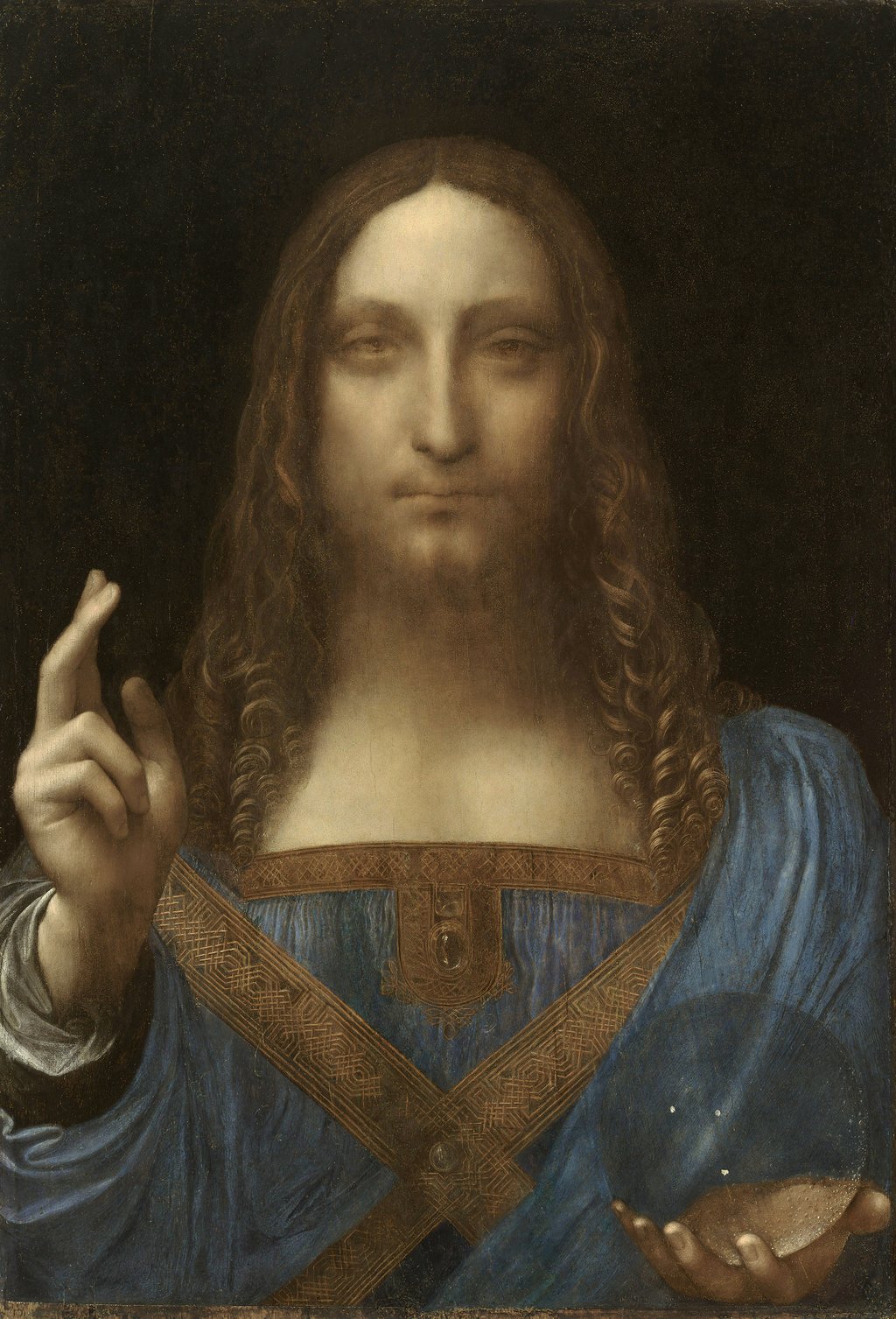 Facing directly out towards the viewer, this Christ figure displays a steady, beneficent gaze. His eyes are rendered with Leonardo's typical use of sfumato, which he created with his own fingers, manually smudging the work to create the smoky effect that can also be seen in the eyes of the Mona Lisa. The curls that ring his head bring to mind Leonardo's many studies on that subject, from the ringlets of St John the Baptist to his ink-on-paper studies of anonymous curly-haired figures. The dark background was badly damaged when the painting was discovered, and restoration work involved retouching the paintwork, as well as generally cleaning the work, which must have been a nerve-wracking task.

Christo on his Abu Dhabi desert dream: 'I hope to do the project before I die'

Opinion: The UAE is now, without a doubt, the region's capital of culture

A short life of intrigue

The work's high price reflects the fact that so few Leonardo da Vinci works are still in circulation. The work was only attributed to da Vinci in 2011, when it was included in the UK National Gallery’s blockbuster Leonardo exhibition. It was at that point still in the hands of a consortium of Old Masters specialists who had bought the painting in 2005 in New Orleans for less than $10,000, acting on a hunch that beneath the overpainted Christ figure was the genuine work of Leonardo.

After the work was established as a Leonardo – well, you can imagine what happened. Its price skyrocketed as it moved from the orbit of art specialists to general collectors. There are lawsuits, tangential affiliations to Donald Trump, mystery buyers: in its short time as a publicly recognised Leonardo, Salvator Mundi has accomplished everything you would want for a high-stakes painting.

In 2013 it was bought by a Swiss art dealer, Yves Bouvier, who sold it within days to Dmitry Rybolovlev – a Russian billionaire whose other acquisitions include one of Trump’s homes in Palm Beach, Florida, which Rybolovlev bought for $95 million and then partially tore down. In the case of the Leonardo, while Bouvier paid US$75 million in a private sale brokered by Sotheby’s, New York, Rybolovlev paid US$127.5 million days later – meaning Bouvier netted $47.5 million. Rybolovlev has since filed suit against Bouvier, in a case that is ongoing.

Last December, when Rybolovlev put it up at auction – at Christie’s, this time – the house put a $100 million estimate on it. It was met handily by the opening bid. From there the painting climbed to $450 million, and DCT subsequently announced the acquisition via Twitter.

The definition of a Renaissance man

Leonardo's position in art history was cemented during his lifetime. When he painted the Salvator Mundi, somewhere around 1500, he was in his late forties and one of the most famous painters alive. He had completed the groundbreaking mural Last Supper at a Milan cathedral, depicting Christ's last meal with his apostles, as well as a number of portraits of Italian noblemen and women. His reputation as the consummate Renaissance man comes, Al Mubarak notes, from his "significant legacy not only in the realm of art but in science as well, each discipline informing his mastery of the other". He was fascinated by flight and developed a prototype for a helicopter and a hang glider; several innovatively accurate maps; anatomical studies of the human form; and research into the properties of light. In Louvre Abu Dhabi's world history, Salvator Mundi is an important way to represent the contributions of the Renaissance, the period in which Europe broke out of the Dark Ages and started moving towards science, reason and secular art.