How street artists have made Amman their canvas - with dramatic effect

Mural by local artist Joanna Arida, with birds representing freedom. The muralist likes to add a splash of color to her black and white pieces. Courtesy Baladk Project

Walking up and down the stairs of Jabal Weibdeh, an artsy neighbourhood in West Amman, I squinted in the midday heat. It was Ramadan and there was not a soul outside. Jordan's desert sun baked into my clothes, but I was on a mission to comb the streets in search of art.

The beige city is one of the most recognisable in the Middle East with its limestone apartments and strict building codes, but in the past few years, it has been given a splash of colour thanks to the blossoming street art scene. “Amman is full of empty walls that need to be covered,” says Mu’ath Isaeid, the 28-year-old organiser of the annual Baladk Street Art Festival, in collaboration with the Al Balad Theatre, which took place in May this year. It has been instrumental in introducing artists to the city’s walls.

While other Arab cities like Beirut, Tunisia and Cairo boast a vibrant street art culture, Jordan’s capital has lagged behind. According to some, it only began to thrive in the past six years. “This is the year things are kicking off,” says Suhaib Attar. The 25-year old dreadlocked Jordanian (@suhaib_attar on Instagram) is one of the scene’s most prominent and outspoken members. He was first taught to hold a spray can by Wesam Shadid aka Wize One (@wesamshadid on Instagram) the de facto grandfather of graffiti in the country.

Attar discovered the art form when he was 17. Raised in East Amman, he was a self-confessed “thug” prone to fighting. After a particularly grim bout, his mother said he needed to find something to channel his energy. He tried meditation and music, but found both boring. Then he began to paint. Although at first his conservative parents disapproved of his newfound passion, he persevered, eventually attending university to study art.

He got a job with AptART, an NGO that collaborates with underprivileged communities across the Middle East on beautification projects to raise awareness. From there, he was introduced to international artists who taught him about developing his own style and how to use different materials to suit different walls. Now, Attar travels abroad a few times a year to create murals, although he plans to reside in Amman, saying, “I don’t want to live outside the country. I was born here. I kinda love it.”

The grandfather of street art

When Shadid moved back to his country from South Africa in 2006, there were barely any murals in Amman, save for men’s declarations of love scrawled haphazardly onto walls. To kick-start the scene, Shadid approached the British Council to see if it would open a wall for artists to paint in its car park. And that’s when Amman’s street art scene began to lift off. For five years, creators were “really free to do whatever they wanted. They used to come and experiment, testing ideas and painting every Friday,” recalls Shadid, 42. He believes that this particular wall was instrumental in nurturing the craft locally. And its growth has been amazing, he says. “It really makes me happy whenever I walk in the street.”

From that one car park, the appetite for murals in Amman was born. Now, everything from stencils to realistic portraits can be seen across the limestone city, with everyone from shopping mall owners to international brand heads commissioning work. “People thought it would be more unique to paint a wall than hang a canvas in their house,” says Joanna Arida, a 20-year-old architecture student and muralist (@joannaarida on Instagram). The artist works on commissions in her free time, which keeps her engaged in fine art while she studies.

Hover over or tap on Arida's artwork to read more about it: 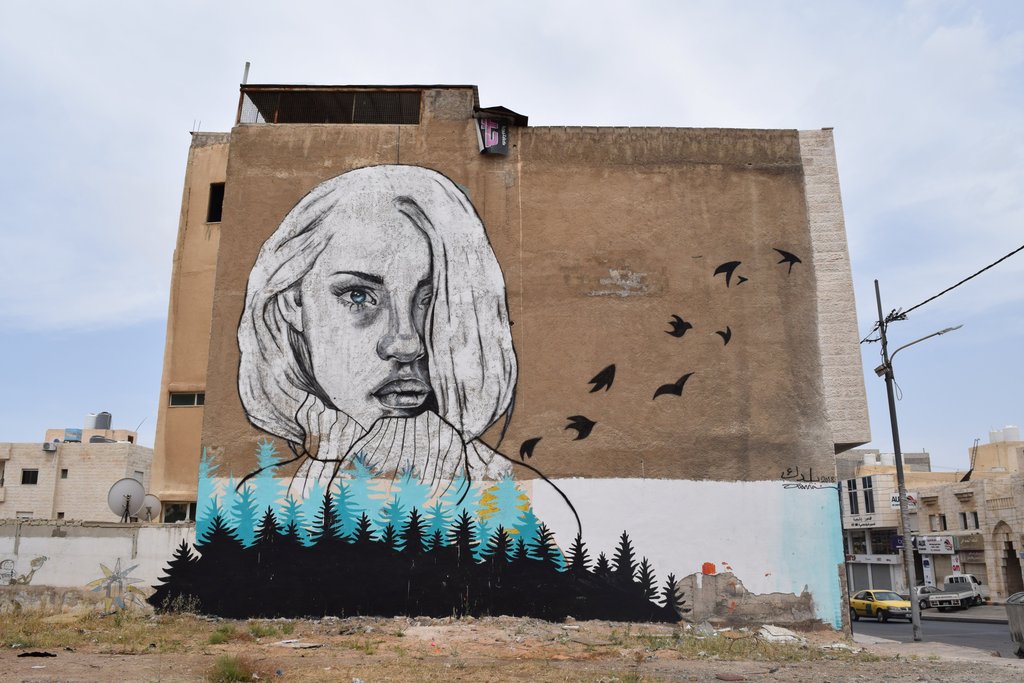 In some parts of the Middle East, such as Lebanon, street art occupies a legal grey area. In Amman, though, it’s against the law to paint any wall without permission, either from the municipality or the owner. Perhaps it’s the hefty fine levied on those who break this law or the fact that local artists grew up with a scene that fostered and paid them for their art, but nearly all Jordanians are clear about one thing: they are not taggers. But local artists do run into problems if their work addresses politics or religion.

Attar, who specialises in animal portraits that incorporate geometric designs has found it easier to draw animals, as working with human representations can sometimes lead to outrage from those of a more conservative stance or the municipality. “As long as you’re not touching religion or the monarchy, no one cares,” says Isaeid.

Baladk Street Art Festival, originally focused on bringing local artists together to paint, has evolved since it was founded six years ago. It now invites international as well as local artists to paint the city. It recently released a map of previous installations so tourists can scour Amman for murals from years past.

“I’d never heard about the Jordanian scene,” admits Lima Lima (@limalima.streetart on Instagram), a French artist who painted a mural for this year’s Baladk Festival. “Street art is spread everywhere in the world but unfortunately the Middle East is not known for its scene, especially [by Europeans.]” Lima Lima, 34, incorporates embroidery motifs into her designs as she believes it’s important to meld personal style with local imagery. Her wall is part of a three-piece installation in East Amman.

Click to see a video of Lima Lima's work:

“Central Amman and Jabal Amman are not really Amman. We wanted to get out of that,” says Isaeid, explaining the push to include sites in East Amman in the latest Baladk. Describing those areas as “gentrified”, he says it was important for the festival to reach all parts of the social spectrum.

Describing the local scene as organic, Dina Saadi, a 31-year-old street artist living in Dubai says that she likes the strong sense of community between Jordanian street artists. “It was a very humbling experience to see neighbourhood kids getting involved in the painting process.”

Maha Hindi, 21, who took part in Baladk and also works with NGO The Orenda Tribe, which creates socially responsible apparel from designs by children living in distressed areas, says that seeing the impact of murals in deprived neighborhoods makes you feel like “you are doing the right thing in the right place.”

Hover over or tap on Hindi's artwork to read more about it: 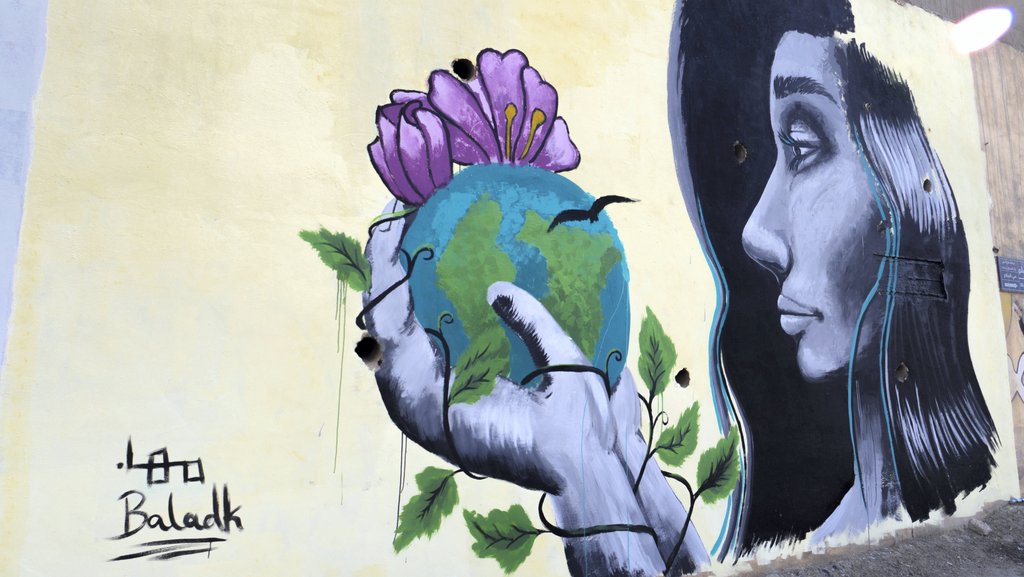 However, although many NGOs do good work with the local communities and with refugees at camps like Zaatari, for example, for some Jordanian artists it feels like a double-edged sword, as it frustrates them that some international representatives of these organisations use photos of themselves with kids to garner fame. “At the end of the day, we are all refugees,” says Attar, who was born in a camp to Palestinian parents and disagrees with the idea of labelling people as anything other than human. Although he could use his work with local communities to boost his career, he says work will come. “I don’t believe in short cuts. I believe in a long bumpy way.”

Street art is typically male-dominated and yet this year’s Baladk festival featured 12 women out of 15 artists in total. They were chosen by a blind panel, so their gender didn’t influence the selection. It’s rare to see such a proportion of female artists in one show anywhere in the world. “This country works a lot on female empowerment and education,” says Arida.

She believes Queen Rania’s female-focused initiatives and influence have helped to foster women’s ambitions. But this wasn’t always the case — three years ago the festival received more male applicants than female. Sara Allan, a 21-year-old artist and student, started out in street art six years ago, and is a prime example of the shift towards the prominence of women in the scene. She says that when she is painting, gender doesn’t matter. “People don’t judge you when you’re doing your art.”

Isaeid believes that Baladk offers a safe space for creatives to explore painting on the streets. “Part of the festival is about introducing artists who wouldn’t go to the walls,” Isaeid says. Newbies learn techniques – such as using a spray can to create gradients or how to transfer a small painting onto a three-metre wall — from the more established crew. The newbie roster at this year’s festival included an American exchange student and local artist Rawa, both of whom had never painted a wall before.

The progressive and inclusive Baladk Street Art Festival has made a vast contribution to the colour of Amman, both literally and metaphorically. Offering a platform for young and up-and-coming artists with unique ideas and ways of expressing them has made the diversity of art that adorns the city’s walls truly impressive. Let’s see what Baladk brings next year.

UAE wins rights to host SpaceOps 2023 space conference
Which African countries can I fly from and what are the rules?
Marriott will open two new luxury hotels on Sharjah's east coast
3D printing can one day solve our supply chain woes
MORE FROM THE NATIONAL
World’s first NFT museum opens in Seattle

Seven things to do as Alserkal's Quoz Arts Fest returns