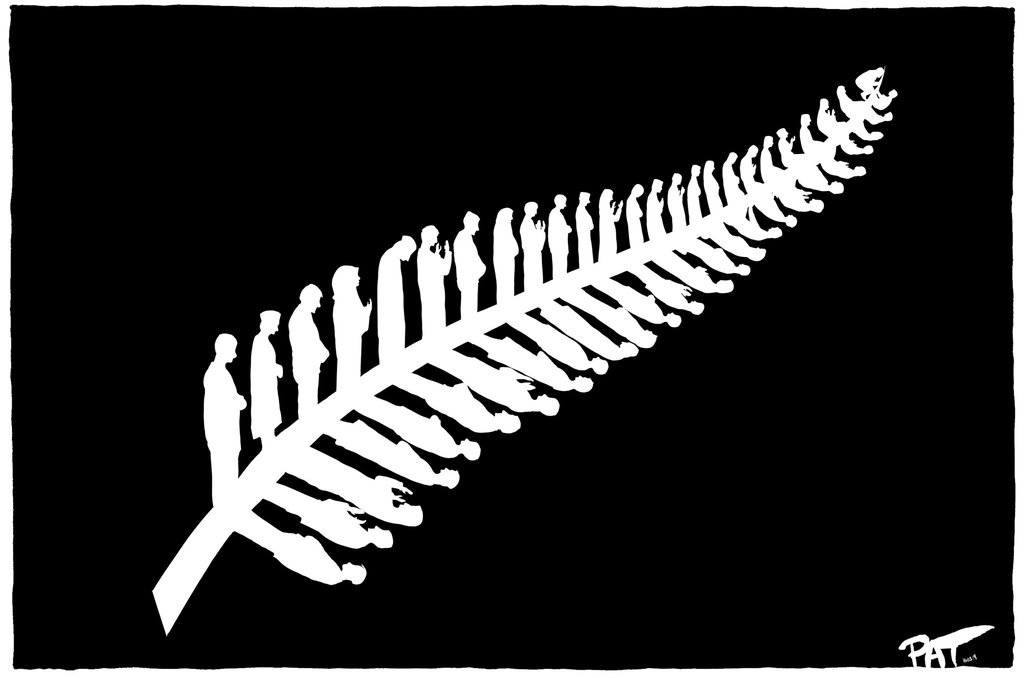 Australian cartoonist Pat Campbell, who works for The Canberra Times, has drawn an illustration of the famous New Zealand silver fern, but he's beautifully reimagined it as a tribute to the victims of the March 15 terror attack in Christchurch, at Al Noor Mosque and Linwood Islamic Centre.

The work shows Muslims in different stages of prayer as the individual branches of the fern. He first drew the image on Saturday morning, the day after the attack, depicting the 49 victims. When the death toll later rose to 50 on Tuesday, he added another figure to the illustration.

He offered a high resolution version of the illustration on his Twitter account for "those wanting to use the image for themselves or nonprofit fundraising for victims".

Hover over the dots on the image above to learn more about this beautiful tribute.

What is the silver fern?

Rooted in Maori history, the silver fern (Cyathea dealbata) is often used to represent New Zealand, and has been in the country's iconography since the late 1800s. It is the symbol for the All Blacks national rugby team, and has been adopted as the logo for top athletes and companies in the country, as well as Tourism New Zealand and New Zealand Trade and Enterprise.

Campbell told BuzzFeed News that he has friends in the Christchurch area, and, following the incident, had been unable to sleep; that's when the idea came to him. "I was thinking of the silver fern and thinking the pinnae – the individual bits coming off the stem – looked like figures, a similar number to the number of victims," he told the publication.

"The fern is about people coming together, as one," he added.

People seem to have really taken to the work, with Campbell's posts going viral. "It melts you with a simplicity that is hauntingly beautiful," wrote one Twitter user.

It melts you with a simplicity that is hauntingly beautiful. #NewZealand's iconic #silverfern is redrawn as 50 #Muslims in different stages of prayer. By Pat Campbell for the @canberratimes pic.twitter.com/0dJlBI2Sa0

Campbell was not the only one to use the silver fern as a tribute, either. The Sydney Opera House projected the symbol onto its building in solidarity with its neighbour.

Campbell's design has also been used in tweets that evoke the words "Hello Brother", which were the final words of the first victim, Haji Daud Nabi, as he greeted the shooter at the front door of the Al Noor Mosque.

The victims of the Christchurch shooting

The pictures and crafts from London's 'Silk Road'

UAE and four others elected to UN Security Council